An OCONUS operating base, serving as the hub of a network of drone bases, required upgrades to their secure network infrastructure. Drone operations rely heavily on real-time video transmissions – demanding constant high bandwidth availability from the network.  The 10GBS network installed at this base was being secured with Type-1 Encryption devices designed for 1GB network speeds, due to cost and availability constraints associated with 10G encryptors.  With a hub & spoke physical network layout, this required many encryption devices and multiple crypto hops for communications within and in/out of the operating base.  As such, the network’s bandwidth was typically degraded to 1 Gigabyte or less, with additional latency introduced, creating issues associated with video transmissions necessary for the completion of the base’s mission.

The command changed their security strategy from encryption to the INTERCEPTOR™ Intelligent-Alarmed PDS from Network Integrity Systems and installed INTERCEPTORs to secure the entire footprint of the network.  INTERCEPTOR does not impact network bandwidth, and the solution provided the operating base with access to the full bandwidth capabilities of the network.  The simplicity of the INTERCEPTOR architecture, aligning with the Point-to-Multipoint hub & spoke network layout, enabled the base to deploy a consolidated number of devices to secure many network paths including a secure failover between primary and backup data centers.  In addition, the burdensome processes associated with encryption COMSEC management were eliminated, giving base personnel time back to spend on other mission requirements, and reducing the operations budget for the command.

Contact us to learn how INTERCEPTOR can give you back your bandwidth! (877-NIS-4PDS) 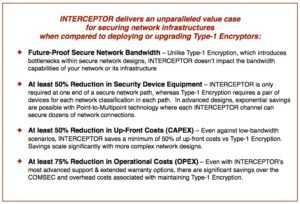