Substation Attacks: Protecting the Thin Line between Comfort and Crisis 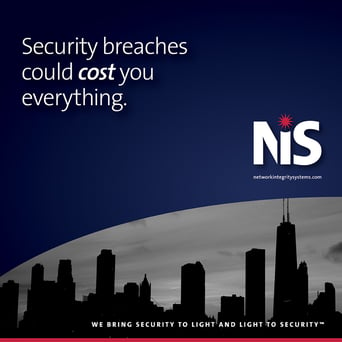 Almost 10 years ago, an incident occurred at a Pacific Gas and Electric power substation near San Jose California (Metcalf) which nearly brought down power to the vast area served by the station. In short, bad actors attempted to disrupt power generation by firing high-powered rifles at the plant’s transformers. Only when remote alarms indicated that transformers at the station were overheating, one hour after the attack began, did the actions cause responders to investigate. Had fiber optic sensing technology been deployed by the substation, to detect the disruption of the communications cables which occurred as the precursor of the attack, or on the perimeter fence line surrounding the station, the event may have been prevented and the perpetrators apprehended. Eerily, now ten years later, numerous similar attacks have happened, within a month’s time in both Moore County and Maysville, North Carolina, Clackamas County, Oregon, and Washington with many other similar instances being reported to the authorities. This time however, these attacks are resulting in widespread power outages for more than three days.

How could fiber optic sensing have helped in these scenarios? In Metcalf, the attackers began by entering an underground communications vault containing AT&T fiber optic cables serving the substation. Had fiber optic sensors been in-place, the effort of opening the vault would have been detected. Once inside the vault, the actors cut the optical cables effectively shutting down communications into and out of the facility. Had fiber optic sensors been in-place, not only would the severed-cables have resulted in instant alarms, but the mere act of handling the cables to make the cuts would have been detected. After the cables were cut, the attackers concealed themselves and waited to see if a response would occur. When none did, approximately 30 minutes after the vault was breached, the attackers approached the facility and began firing their weapons at the transformers. 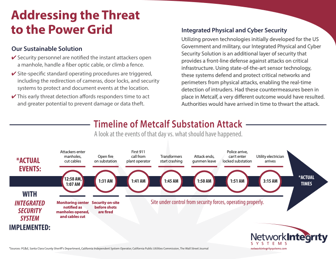 The shooting lasted 15 minutes until police arrived after being summoned by PG&E only because of the transformer overheat condition that was reported. The police observed that nothing appeared out of the ordinary and left the scene. Had fiber optic sensors been deployed on the fence or buried underground, the attackers’ approach would have been sensed and the gunshot noise could have been detected, and more important, located within meters of accuracy. While details of the recent events are still becoming known, the attack scenarios are remarkably like the Metcalf incident, except in some of these new cases, the perimeter fence was breached. Fiber optic sensing technology would have alarmed when the fence was approached, tampered with, and cut and once again could have minimized the damage that was done. 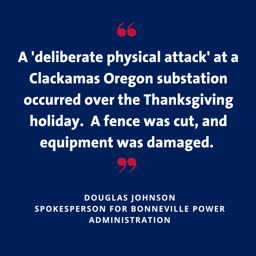 I am also confident that far greater damage could have been perpetrated had devices more debilitatingthan rifle-rounds been used. It makes sense that this could be the next step. What if the fence line was breached and Improvised Explosive Devices (IEDs) were planted inside the stations? With fiber optic sensing technology even that catastrophic action, as well as many other scenarios that could be imagined, could be prevented.
For years, government agencies and military commands communicating National Security Information have been turning to Network Integrity Systems for modern technologies designed to detect attempted intrusions in real-time. Now, these same organizations with critical infrastructure and assets to protect (areas in which they must detect unauthorized access), are also deploying our technologies to protect their perimeters. Electric utilities should also go beyond merely making access to these places more difficult (e.g., using unmonitored fences and walls). They too should adopt modern technologies designed to detect intrusion attempts well before any damage is done.